The race for the nest - "First come, first serve"

At the end of February, the red kites, which have flown south to overwinter, begin to migrate back to their breeding areas. Now it's time to find the right nest, possibly the same nest from last year, expand and repair it a bit and start breeding with the right partner.

But what exactly happens at the nest, who comes to visit and, most importantly, will it be a successful brood? With the help of a small camera it is possible to partially answer these questions. And this is exactly where the story of a nest in North Rhine-Westphalia in the Lippe district begins.

The LIFE EUROKITE project was contacted by employees from Bielefeld University with the background that a tagged red kite was breeding nearby in 2021. Since red kites often use the same nest in the following years, hope was raised that the tagged red kite would breed in this nest again in 2022. So it was decided to install a camera on this nest.

Tagging of the red kite

The tagged red kite "Valencia" was tagged in Spain at the AMUS wildlife station in 2019 after she was found with signs of poisoning and nursed back to health. Valencia was released on November 29, 2019 by Duncan Orr-Ewing (RSPB), Richard Saunders (National Wildlife authority UK, Natural England) and the Mayor of Valencia del Mombuey, Manuel Naharro. Originally, Valencia probably comes from Germany, because soon she started the way back to the breeding area in the district of Lippe, where she spent the breeding season.  In 2021/2022 Valencia spent the winter in southern Spain again. 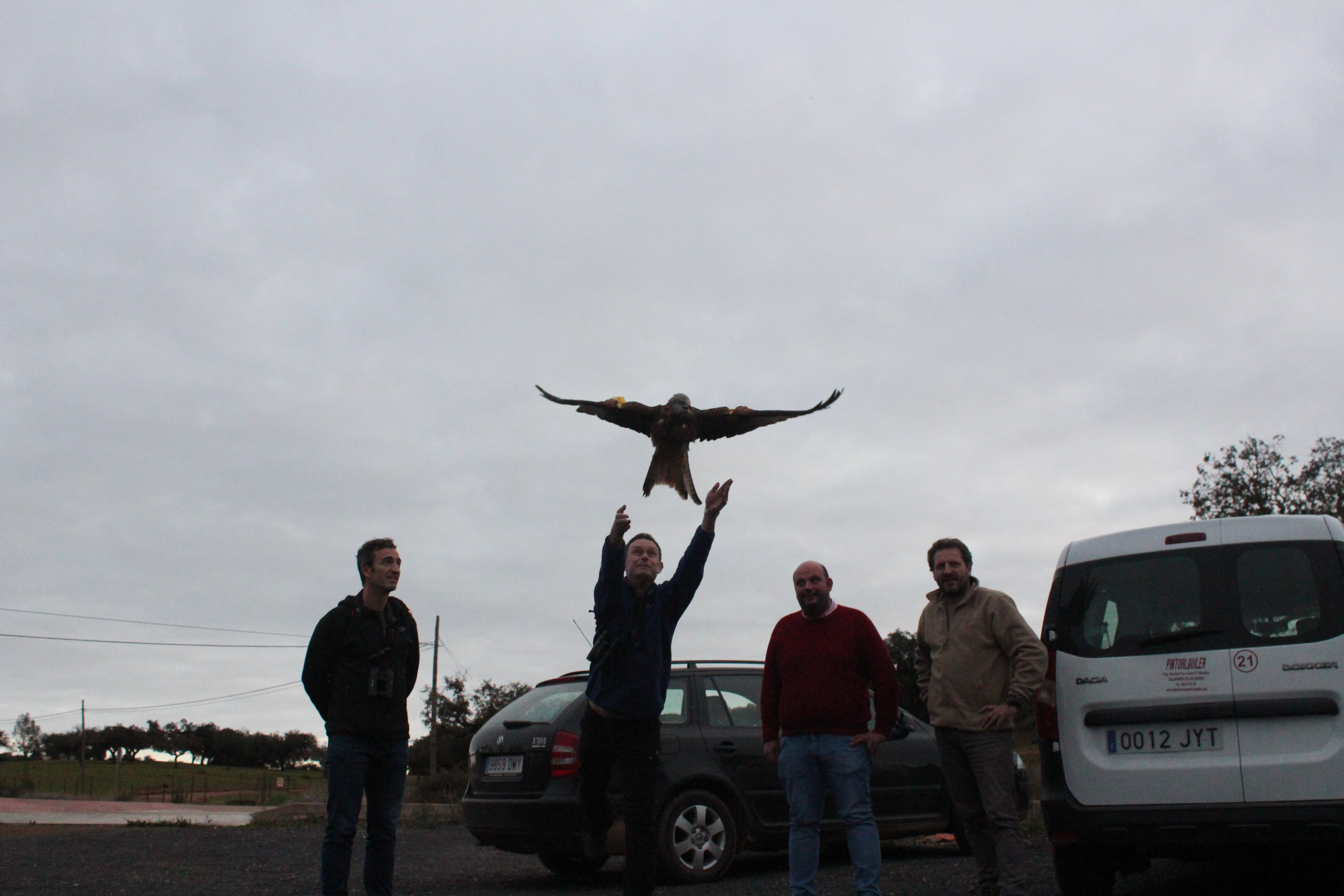 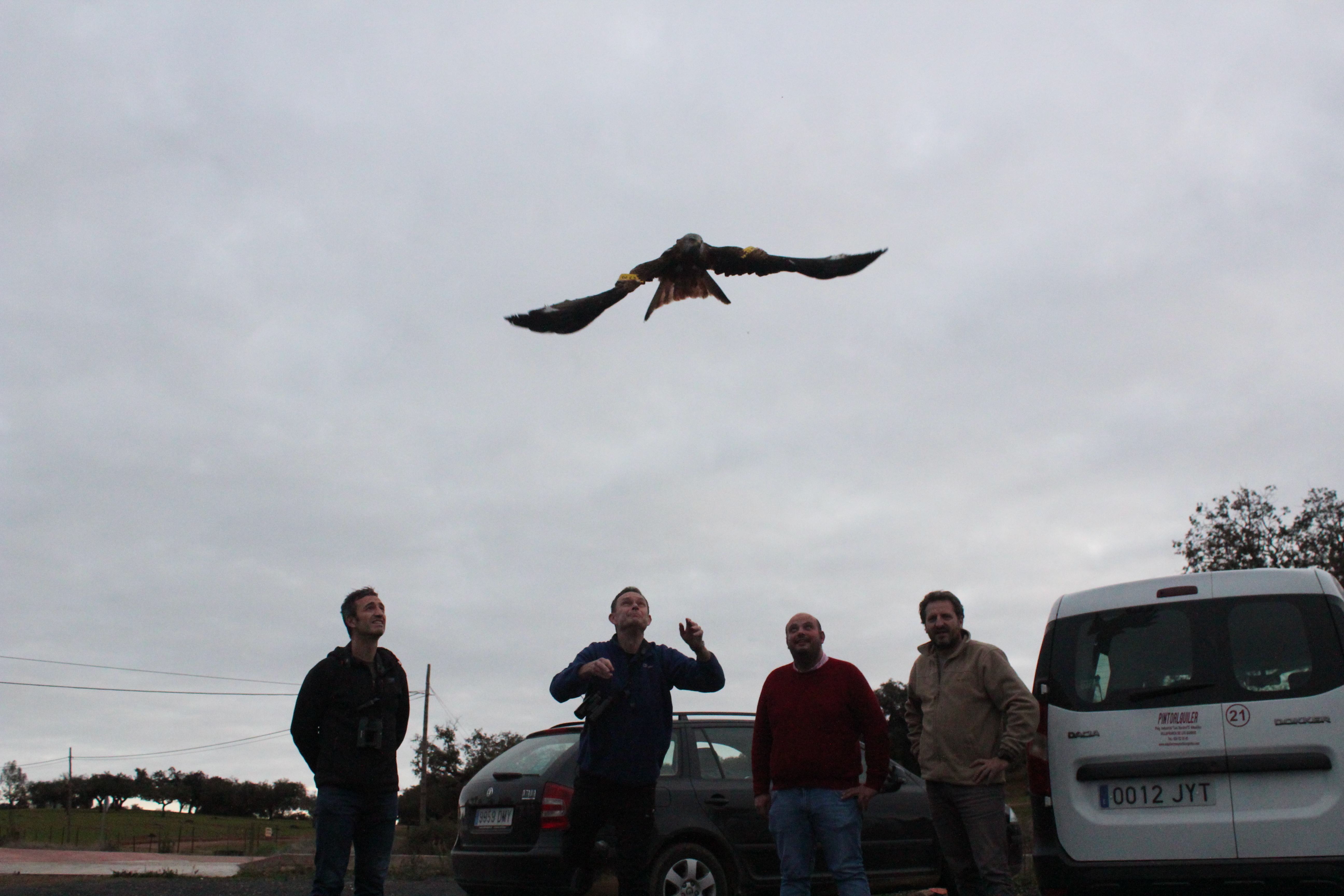 Tagging and release of Valencia in Spain (Extremadura) in November 2019. © AMUS

On February 11th 2022, the Lower Nature Conservation Authority and the “Lippischen Rotmilanfreunde„ installed a wireless wildlife camera from the Seissiger company to the red kite nest that was occupied last year. In this way, everyone involved hopes to learn more about the tagged female and her partner. 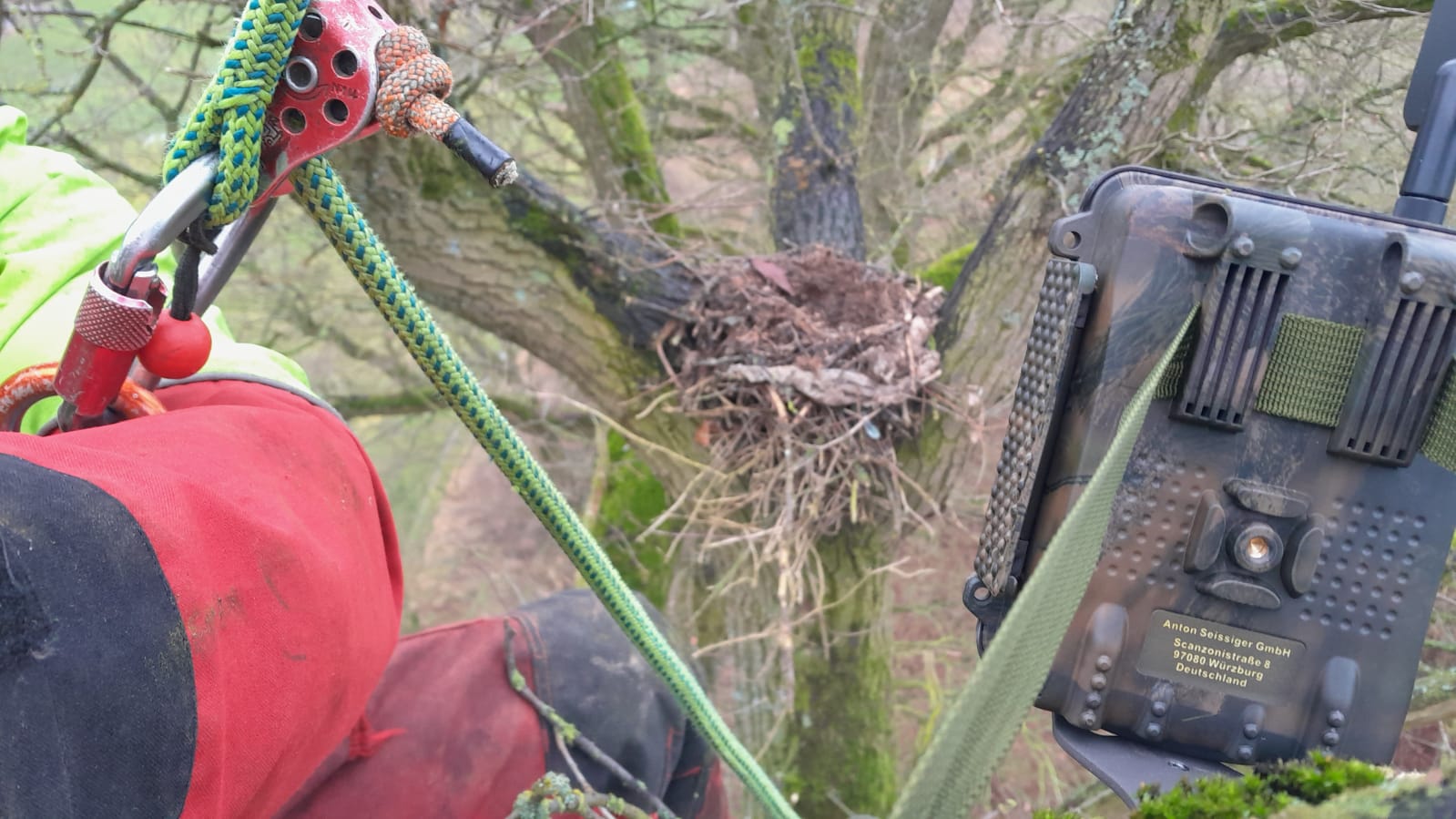 And so the race for the nest began

Nests from the previous year are not only popular for red kites, but are often used by other species as well, according to the motto "first come, first served". So, we were curious to see when Valencia will be heading back home and whether she will arrive at the nest in time, or will she choose another nesting site? At the time the camera was installed, there was no sign that Valencia started her way to the breeding area.

On 12/02 the first visitor was spotted at the nest. It was a great tit that briefly inspected the nest, but probably decided to breed somewhere else because of the size and the high rental costs. Then a real competitor was spotted on the following day. An Egyptian goose examines the nest and doesn't seem averse. Now Valencia has to hurry, but still no signs of a migration start. You can't really blame her, who wouldn't want to spend the winter in the south?! 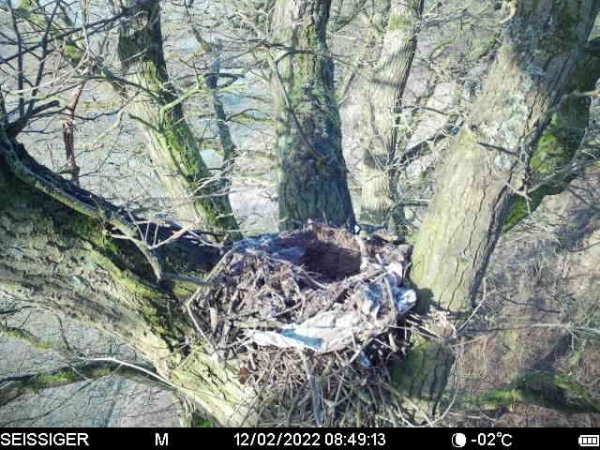 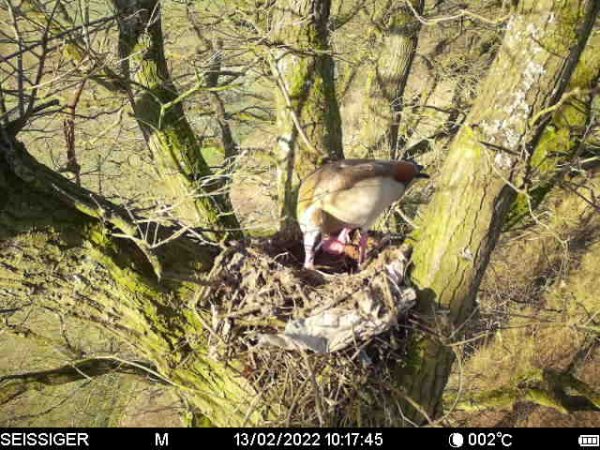 Then a glimmer of hope

On 15/02 the nest was visited by a red kite. Probably a male eagerly awaiting the return of Valencia? But where is Valencia? Valencia continues to enjoy the Spanish climate and has not yet made her way back to Germany. 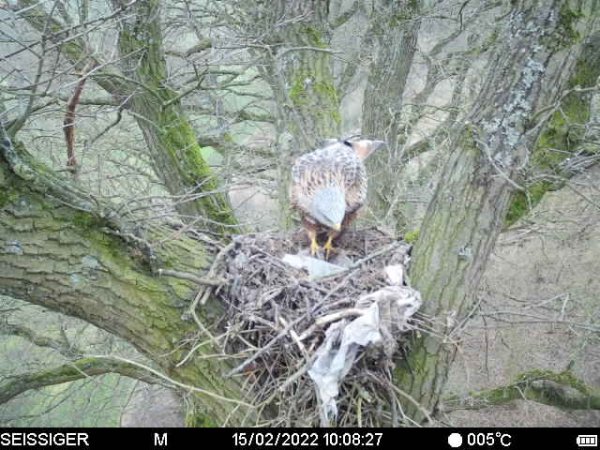 The course of nature

Predation of young birds in the nest of red kites is one of the most common natural causes of mortality. Nest robbery also occurs, and not just among red kites.

On 22/02 the nest camera was triggered again. You can see a marten that got the egg of the Egyptian goose as a midnight snack. Even nests high in the trees are not protected from predators. The poor Egyptian goose... what happens to the nest now? Will the goose breed in this nest again?

It has been quiet at the nest for a few days, neither the Egyptian goose nor any other species have been recorded by the camera. Perhaps the nest will remain free this year? 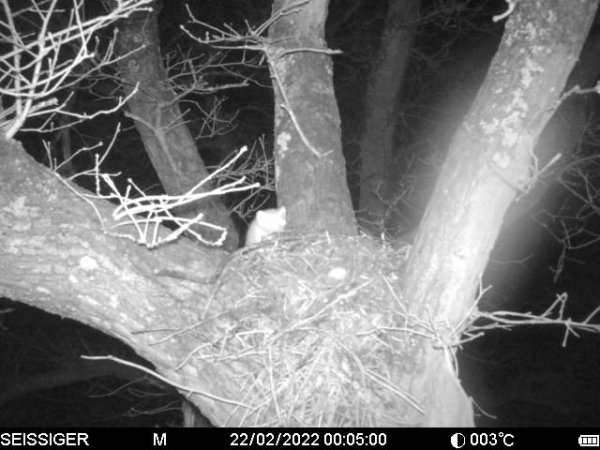 On 2nd February the egg of the Egyptian goose was taken and eaten by a marten. © Kreis Lippe

Another glimmer of hope

On 24/02 Valencia has crossed the border from Spain to France in the north. The linear distance is now over 700 km, but if Valencia decides to fly towards the district of Lippe, half of the distance has not yet been covered.

On 25/02 again a small glimmer of hope. The male red kite has been caught on camera several times. Within 3 hours the red kite was photographed 6 times at the nest. Who knows, maybe he is establishing himself now and preparing everything for the arrival of Valencia? 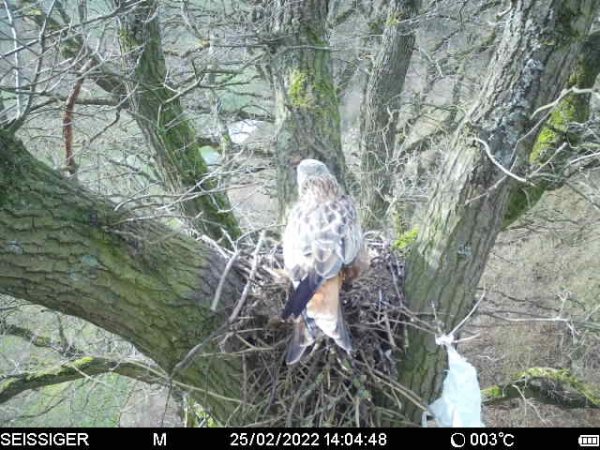 The next day, however, it was very quiet at the nest. Valencia is now in France and continues to fly to Germany.
Then on 26/02 the camera was triggered again by the red kite male and an accompaniment. Both were non-tagged individuals. At this point, Valencia is still more than 1,000 km away in southern France.
In the following days it was again very quiet at the nest, the two red kites that were sighted did not appear at the nest again. 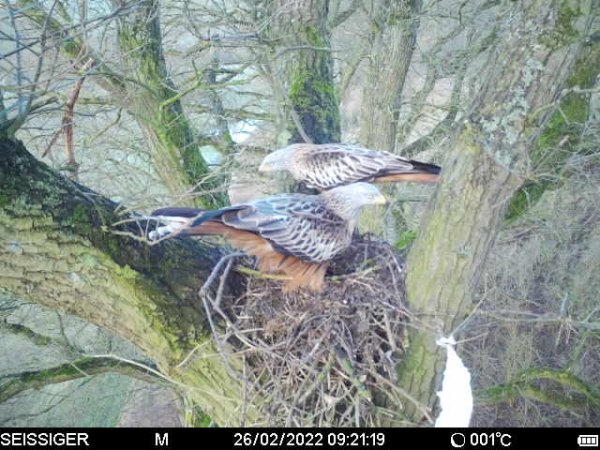 On 07/03 a shock. The GPS-Logger of Valencia has not sent data for the last 3 days. Did something happen to her? Or does the transmitter simply not have a GPS signal at the moment? The latest data is quickly checked and evaluated. Everything seemed to have been normal until the last GPS-point. No sign of low battery, but no sign of possible cause of death either. So there is nothing left but to wait and hope that the logger will be sending data again soon.

The next morning it was a great relief and at the same time a great joy. The logger has sent data again and shows the last point close to the nest. At the same time, the camera on the nest is triggered. And indeed, Valencia did it and was photographed by the camera while sitting at the nest. Now only her partner is missing. We are excited to see what will happen at the nest over the next few days and hope that the camera battery will last longer so that we can continue to observe Valencia from distance.

In the following days, Valencia stayed at the nest again and again and continued to expand it. On 14/03 Valencia could then be photographed with her partner at the nest. Both seem busy expanding the nest.

We are already ecited what will happen in the next few days and when Valencia will start to breed. 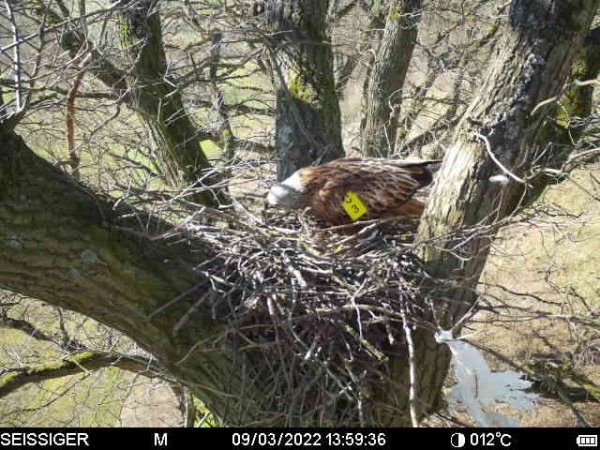 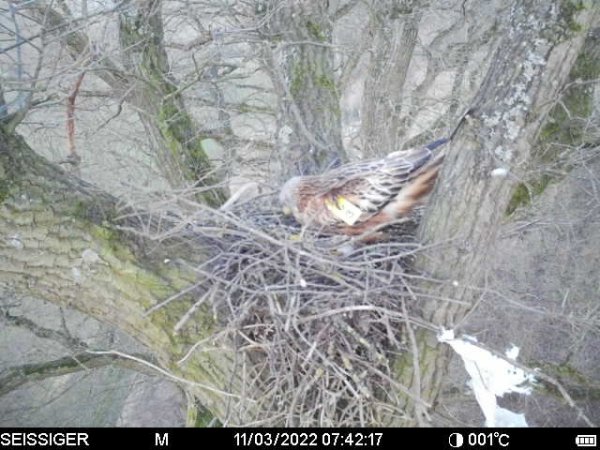 Arrival of Valencia at the nest on the 08.02.2022. During the next days the nest was improved by Valencia. © Kreis Lippe 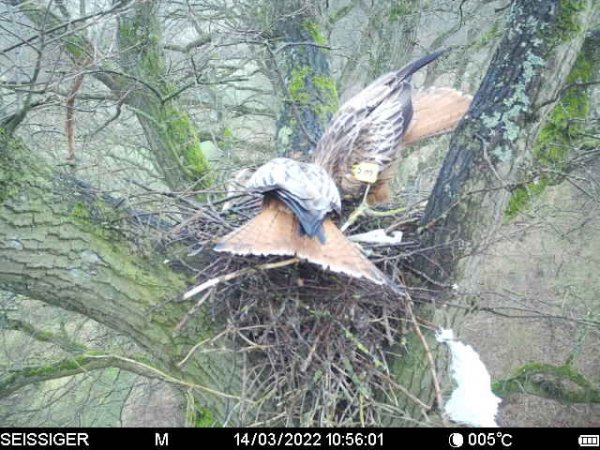 Valencia and her partner were photographed at the nest on the 14.03.2022. © Kreis Lippe

Since not only martens were sighted at the nest (remember the Egyptian goose that lost its egg to a marten), but also raccoons were reported in the vicinity of the nest, the lower conservation authority decided to use tree cuffs to protect the nest. These tree cuffs have a smooth surface which prevents predators such as martens and raccoons to climb up the tree trunk.

However, not only martens and raccoons are among the natural enemies, but also e.g. the eagle owl, which of course is not prevented from visiting the nest by the tree cuff. Fortunately, nothing further happened. Hope it was a one-off visit! 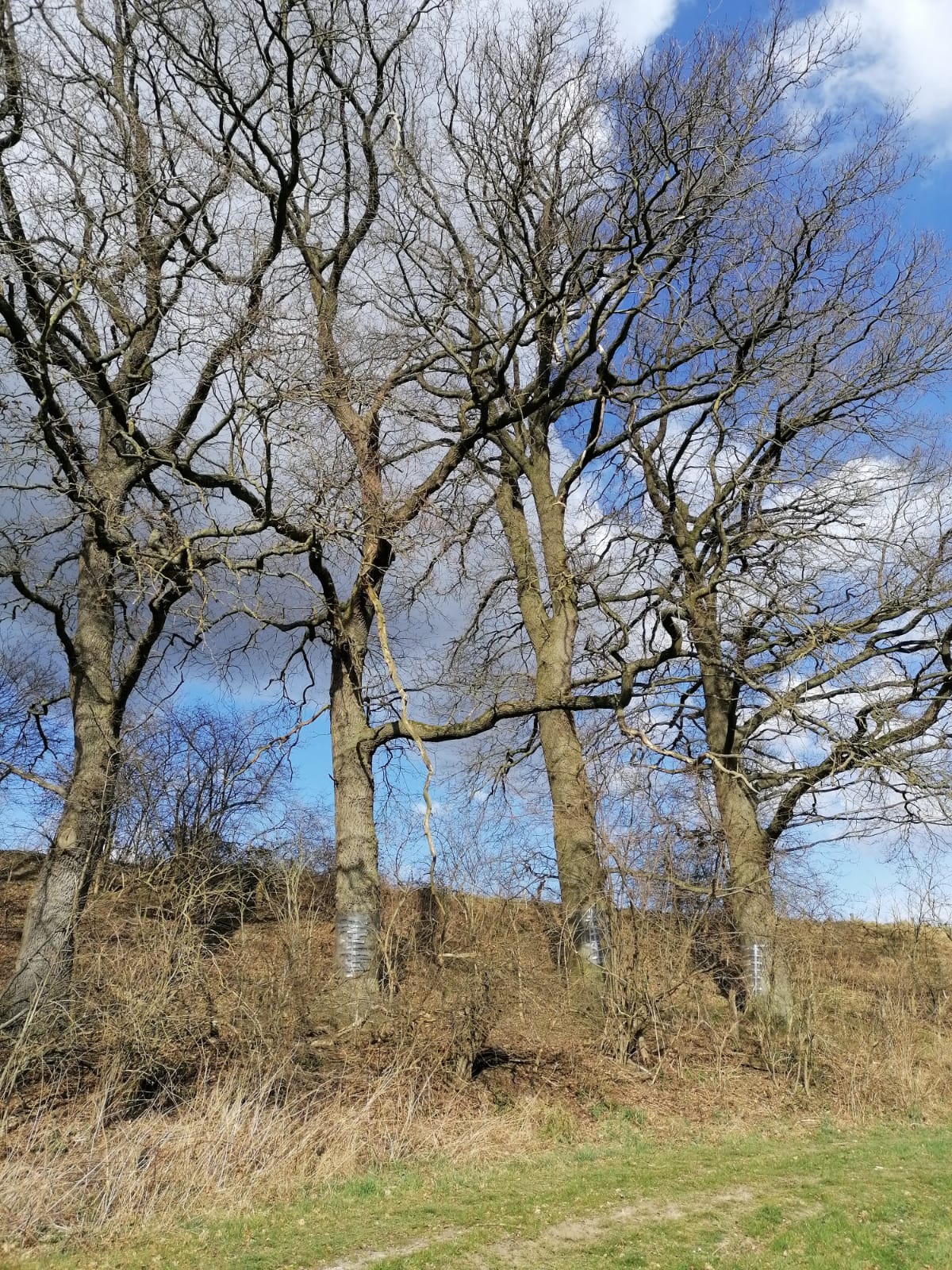 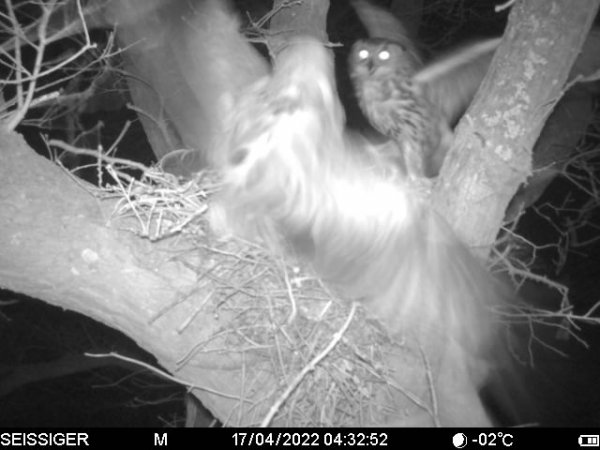 Valencia and her partner seem to be doing very well and there is increasing hope that it will actually be a successful breed. The two are at the nest alternately and don't let the late resurgence of winter stop them from staying at the nest. 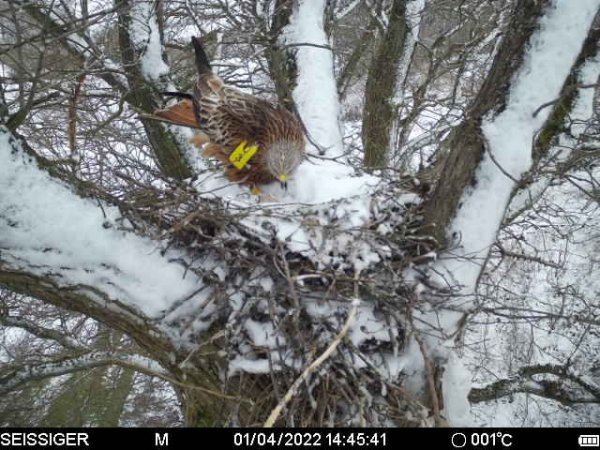 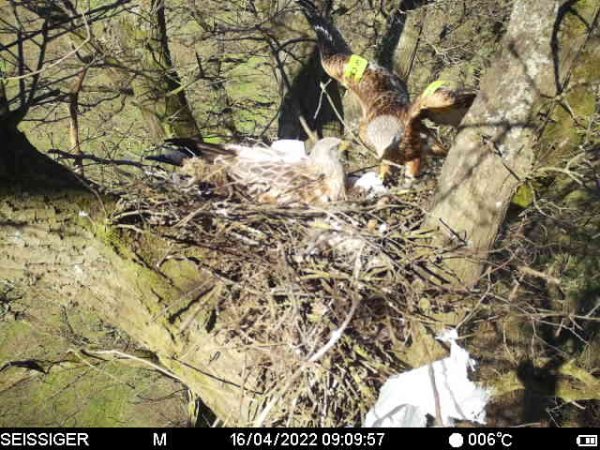 After the resurgence of winter in early April, temperatures are slowly rising again and Valencia and her partner are at the nest alternately. © Kreis Lippe 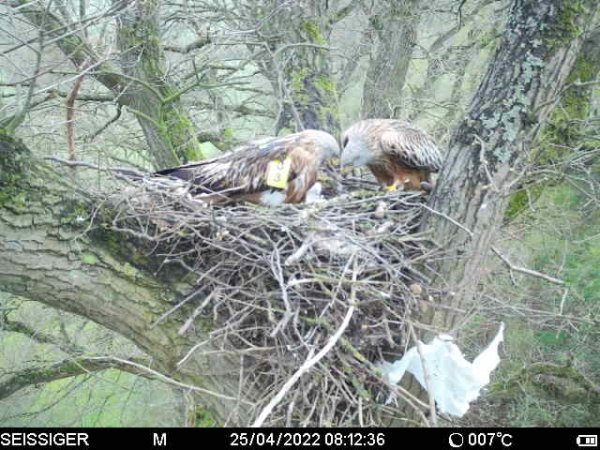 This look into the nest of the two red kites gives an idea and hope that there might be offspring soon. © Kreis Lippe

We are very happy! On 08.05. the camera was able to take the first clear picture of a young red kite. On the photo you can see a small white head that just sticks out over the edge of the nest. It remains to be seen whether it will still get siblings. So, things will continue to be very exciting over the next few weeks and of course we hope that we can watch the little red kite grow. 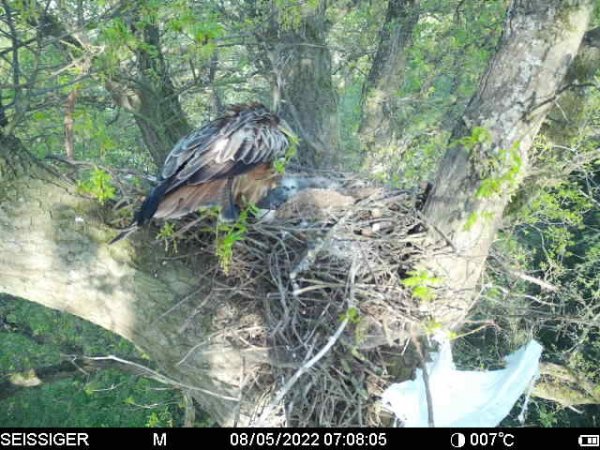 On 08.05. the camera was able to take a picture of a young red kite in the nest. © Kreis Lippe

Tagging of the young red kites of Valencia

On June 14th, 2022, the tagging team of the LIFE EUROKITE project and the local partners on site (lower nature conservation authority district of Lippe & University of Bielefeld) succeeded in tagging the two young red kites from Valencia. Both young birds are in very good condition and reunited with Valencia in the nest shortly after they were tagged. In the days that followed, the young red kites made their first small excursions and always came back to the nest. 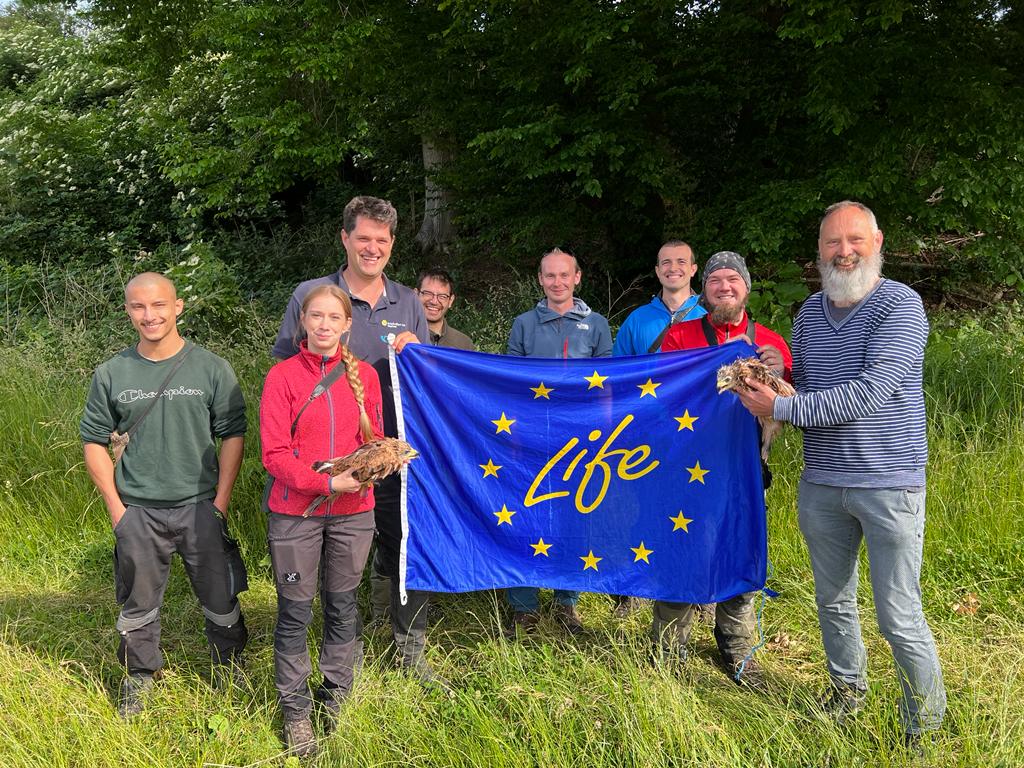 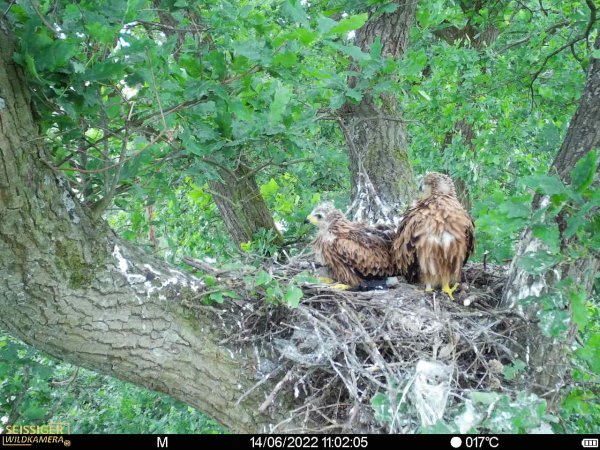 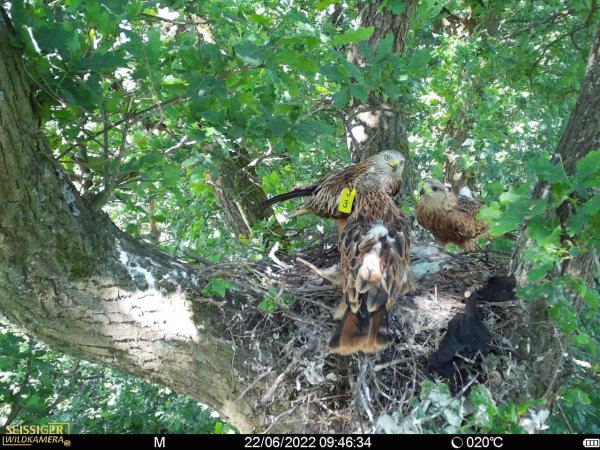 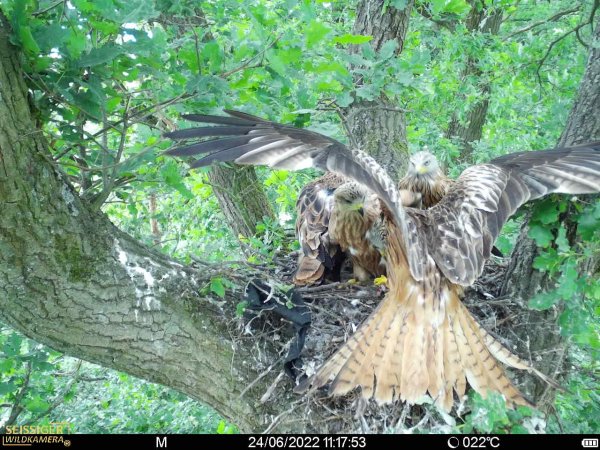 Tagging of the young birds from Valencia together with the LIFE EUROKITE team, the University of Bielefeld and the Lower Nature Conservation Authority of the Lippe district. All were reunited in the nest shortly after the transmitter was installed. © Kreis Lippe