The first group of red kites of the total of ninety individuals that will reinforce the population of the southwest of the Iberian Peninsula in the period 2022-2024 has been released, as part of the action that AMUS leads within the LIFE EUROKITE project

The red kite (Milvus milvus) is one of the few nearly endemic bird of prey in Europe. With its unmistakable silhouette and appearance, it is distributed in twenty-eight European countries; although more than 90% of the breeding population is concentrated in Germany, the United Kingdom, Sweden, Switzerland, France and Spain.

Despite the fact that Spain is one of the countries with the largest breeding population of red kites, its negative evolution has been very pronounced over the last thirty years, especially in the southern half of the country. Such has been the severity of the decline that the species is listed as Endangered on a national scale, with poisoning being the main conservation problem since the end of the 20th century.

Due to the fact that these birds have been facing a critical situation for several decades in the southwest of Spain, the red kite is the target species of the population reinforcement action that AMUS is coordinating within the framework of the LIFE EUROKITE project.

Specifically in 2018, to the south of the province of Badajoz and to the north of the province of Huelva, in an area of 300,000 ha, there were only ten potentially breeding territories, confirming the breeding success in two of them along with a low productivity detected in these couples.

In order to help improve the breeding population of red kites in this area, last June arrived thirty red kite chicks from the forests of Northamptonshire (UK). The reason for the origin of these nestlings dates back to the 1980s, a time when the situation of the red kite in Spain allowed individuals to be translocated to the United Kingdom to help prevent the species from becoming extinct there. Thanks to the great success of that reintroduction program, the British red kite population is currently stable enough (more than 6,000 pairs) to have been able to support the action we are developing on the Peninsula with the transfer of these birds.

For several weeks, the red kites have remained in the aviaries built specifically for this project. It has been a delicate stage during which they have been provided with all the necessary to guarantee their correct growth and acclimatization, avoiding at the same time any contact with the project's technical staff to prevent imprinting or familiarization with humans.

In order to obtain information on the status and location of the birds, in the days prior to the release, all individuals were fitted with GPS-GSM transmitters. After verifying that the devices were not a nuisance to them, sunrise accompanied us in watching the first free flights of the young individuals of this threatened species, which we hope will be part of and help improve the conservation status of the red kite in southern Iberian Peninsula. This milestone will be repeated the next two summers, since previous studies have shown the need to release 90-100 individuals to create a stable population.

At this time we are monitoring the adaptation of the birds to their new environment, from where we want to thank the collaboration and support of all agencies and entities, as well as their respective teams, which are making possible to carry out the red kite conservation: Regional Government of Extremadura, Regional Government of Andalucia, Ministry for the Ecological Transition and Demographic Challenge, Endesa, Banco Santander Foundation, Badajoz Provincial Council, Mossy Earth, Biodiversity Foundation, Valencia del Mombuey City Council, Oliva de la Frontera City Council, Royal Society for the Protection of Birds, Natural England, Forestry England, Roy Dennis Wildlife Foundation and Zoological Society of London.

Three red kites about to leave the aviaries. Photograph by AMUS-EUROKITE. 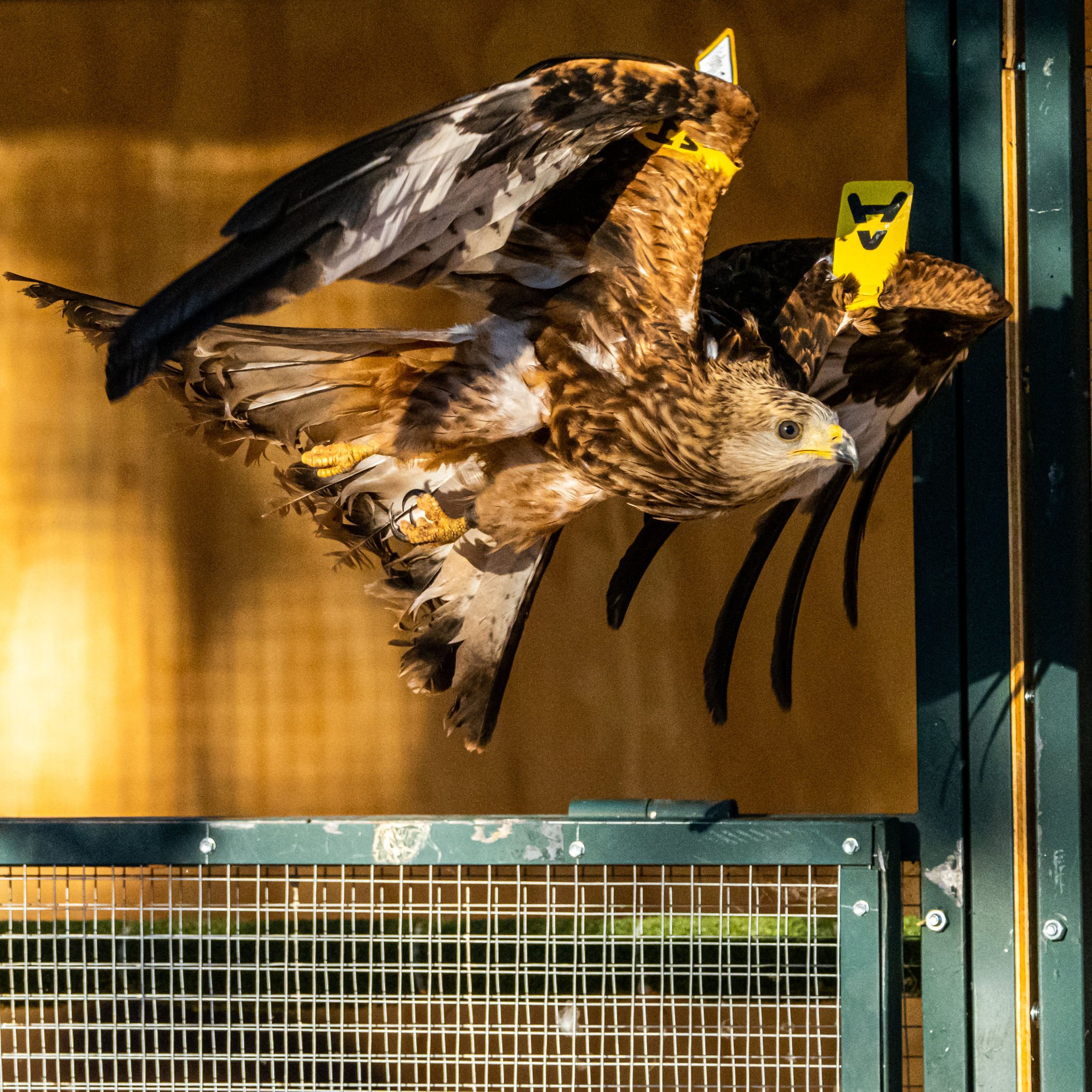